Eamonn was born in the center of Dublin, the capital city of Ireland and was raised on a North side Suburb where he started out on the acoustic guitar at eight years of age. Earliest influences included Slade, Cat Stevens, Neil Young and Rory Gallagher. By twelve he was singing along with his guitar and performing at Church Folk Masses.

At sixteen Eamonn performed live on a national Irish radio show. Around this time he also won a major high school competition performing his own material. After a short stint playing in various bands throughout Ireland, Eamonn headed off to the U.S.A. where he performed extensively. There he broadened his musical horizons, gained vital stage experience and absorbed fresh American music and cultural influences. This blended together nicely with his earlier influences.

Returning to Ireland after four years traveling and performing in the States Eamonn was by now developing a very unique sound and style all of his own which solidified whilst Eamonn performed extensively establishing himself across Europe, the hard way, through a grueling tour schedule. But soon his efforts garnered him the reputation, as he and his band became Major European Festival Favorites including the prestige Rockpalast in Germany and Parkpop in Holland (500,000 people).

During this period Eamonn signed with Universe Productions/Virgin Records and SPV records worldwide. Recorded three critically acclaimed studio albums confirming that an exciting young up and coming World Class Guitarist was emerging out of Ireland.

Entering the new Millennium saw the young Irish Guitarist play, tour and record with many of his earliest guitar influences and heroes such as Rory Gallagher, Johnny Winter, Jan Akkerman, Walter Trout, Popa Chubby, Pat Travers, and Nils Lofgren. As well as opening for everyone from Robert Plant to ZZ Top…

Eamonn McCormack is a true artist, a master of his craft who always performs with that heart-felt passion synonymous with true Irish music legends in the making… 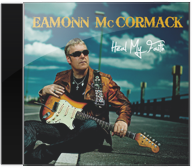 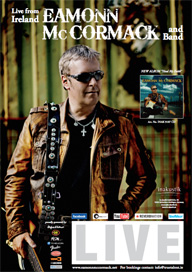